This mini has narrow shiny green leaves,
with a yellow margin.  Grow to only 6" tall. 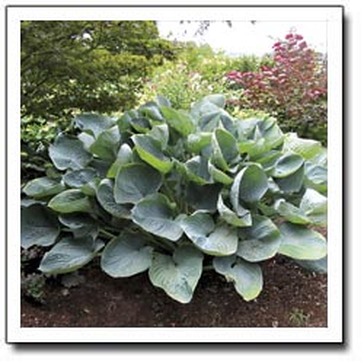 A giant sized, blue-green hosta with an upright habit.  The leaves are 13" by 12", cupped, corrugated, and have an unruly habit.  The next great large blue leaved hosta.

Hosta 'Golden Scepter' is an all gold sport of 'Golden Tiara'.   The leaves emerge all gold in spring and season to chartreuse.   Excellent when used as an edger or ground cover.
Grows to 16" tall by 35" wide.

Hosta 'Gone With the Wind'

An elegant hosta  with dark, emerald green leaves with pointy tips
and a wavy, creamy white edge.  Nice thick leaves that
measure 14" by 10".  Grows to 25" tall by 48" wide. 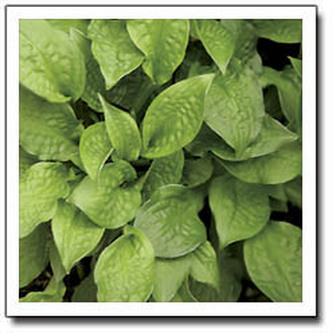 Love the name of this hosta.  'Goober' is a sport of peanut and looks good planted along side of it.  The leaves measure 4" by 3" and are deeply puckered and unruly.  Forms a dense mound 10" tall by 24" wide.

This "species hosta" is used by hybridizers to develop mini hostas.  Shiny green leaves
with ripples margins, make this a good addition to any mini collection.
It has a good growth rate and forms a small dense mound up to 12" tall by 31" wide. 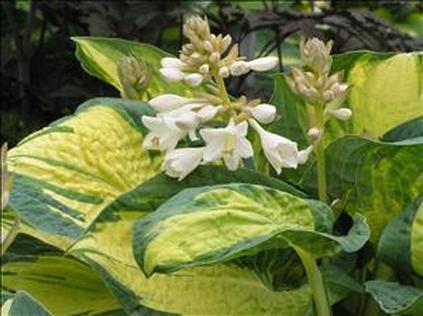 A slow grower, but worth the wait.   The leaves are thick and textured, and have a wide, irregular, blue-green margin that streaks into the beautiful ever-changing center that starts out chartreuse and finally changes to white.  Attractive white flowers top the plant that grows to 29" tall by 58" wide.


This excellent front of the border plant has small chartreuse to deep yellow
leaves with wavy edges.   Does well with some sun to give good color.
Has a fast growth rate. 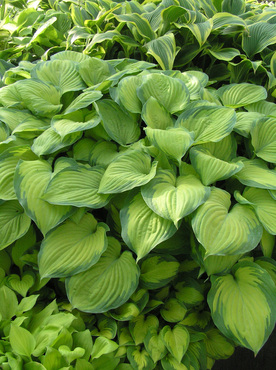 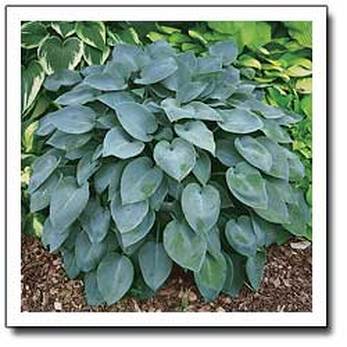 Likely the best example of a blue-leaved hosta possible. Deep blue-green leaves form a mound 18" high by 43" wide.  One of the last hostas to go dormant in winter, this plant will appeal to your sense of sight for many months each year. 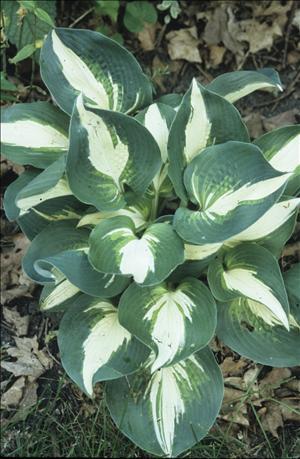 Hosta 'Half and Half'

This sport of 'Lakeside Cupcake' provides a beautiful
contrast of the pure white centers against the dark and light green margins.   Leaves are rounded and lightly cupped and forms a mound 12" tall by 18" wide. 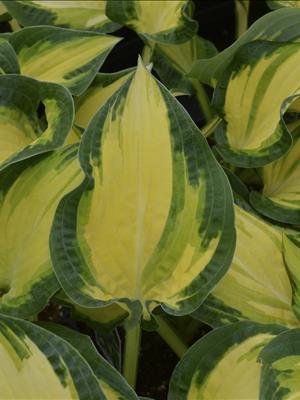 
This sweet sport of 'Orange Marmalade'  has wider
blue-green margin and strips of light green through
the yellow centers.  Leaves are smaller and the plant
grows vigorously.  A medium sized hosta that
grows to 18" tall by 28" wide.

'Harpoon' has dark green glossy leaves with thin yellow margins.
A vigorous hosta that would make an excellent border plant. 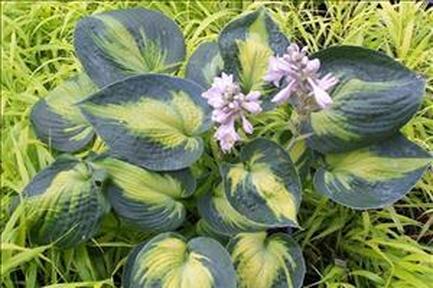 'Hi Ho Silver' is a sport of 'Ginko Craig'.   Its lance-shaped leaves are olive
green with pure white margins.  Grows to 12" tall by   40 inches wide. 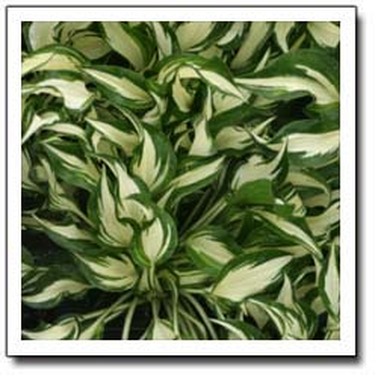 A standout variety for sure!
Curly and colorful foliage forms a small mound just 4" high by 11" wide. 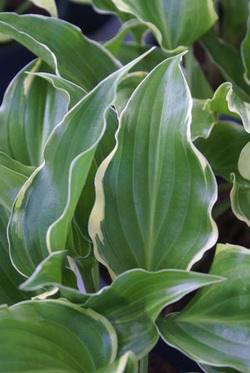 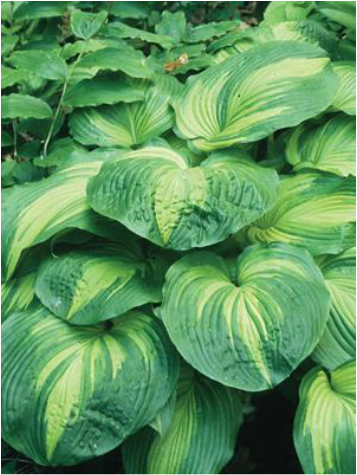 This sport of  'On Stage'  has wide green margins
which are split by spikes of bright yellow with
both colors complementing each other.  Leaves
grow to 12 1/2" x 9" and forms a large cascading mound 19" tall by 42" wide. 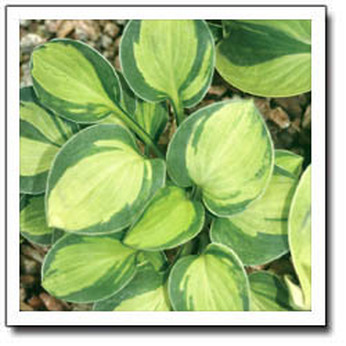 A sport of 'Royal Mouse Ears', this cute hosta forms a small, dense mound of white-centered foliage, with blue-green margins. This stocky little plant maintains a good growth rate, even in containers.  Leaves measure 2 1/4" x 2" and grows to 6" high by 16" wide.

'Hope is a mini sport of 'Baby Bunting'.  This hosta's foliage emerges a
medium green and then seasons to a dark green with an irregular gold margin.
Leaves grow to 2.5" by 1.5" and forms a neat little mound. 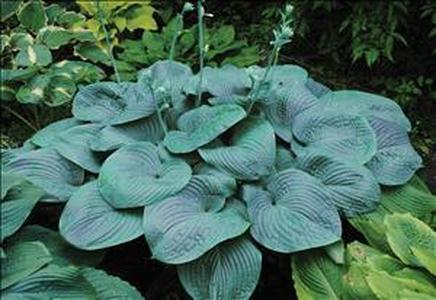 A stunning large, blue-leaved cultivar.
The unusual "hump" in the center of the
leaf gives the hosta its name.  The leaves measure 17" x 13" and grows into a mound 28" tall  by  70" wide.

This is a streaked selection of Hosta kikutii from Japan.   A nice hosta for
collectors with its narrow spear-like grey-green leaves with irregular yellow streaks.  Grows to 8' tall by 14' wide and makes a great container plant. 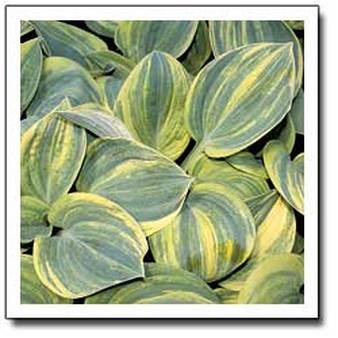 This unique plant features blue foliage, heavily streaked with gold and green.  Leaves are evenly corrugated and well-substanced.  Grows into a
mound 16" by 36" wide 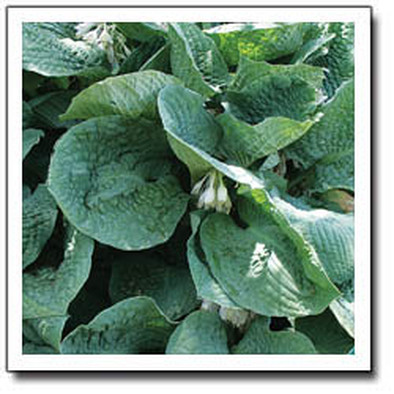 Silvery-blue leaves are convexly cupped, and heavily  corrugated.   Grows  into  a  mound 16" tall by 46" wide. 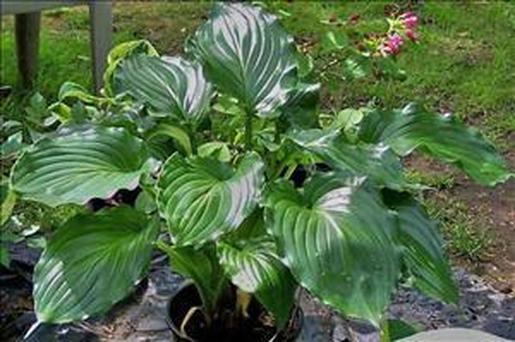 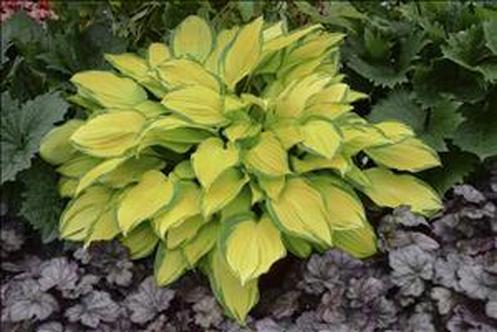 The third in the 'tropical' series, the first was 'Fire Island', than 'Paradise Island'.  This improved cultivar has wider dark green margins,  a thicker leaf substance and a strong growth rate.  Grows to 12" tall and 18" wide. 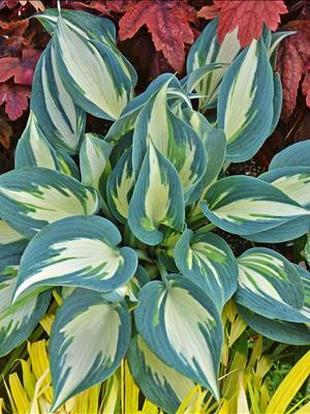 'Ivory Queen' is the reversed sport of the popular
'Blue Ivory'.  Forms a beautiful mound of cream
to near white centered leaves, with blue-green margins
and a dash of green running through the two.
Grows 12" high by 18" wide. 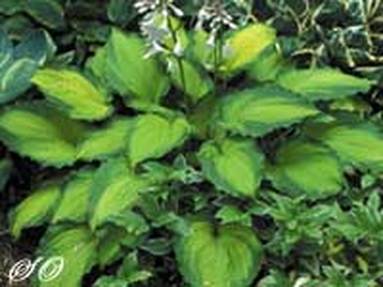 This multiple award winner, forms a wide clump up to 6 feet accross.  It has large yellow-gold leaves with dark-green rippled margins. 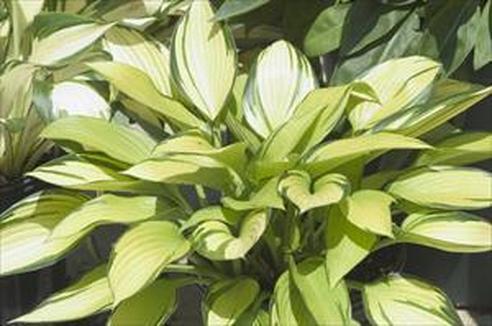 This nearly all-yellow sport of 'June' turns chartreuse in mid-summer.  Sure to be a favorite.  Grows to 24" wide. 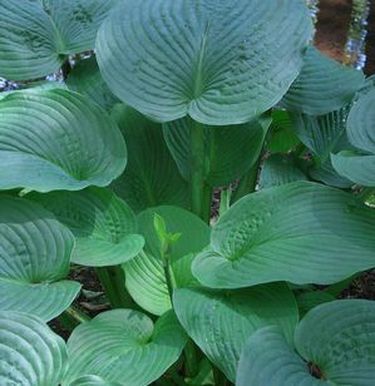 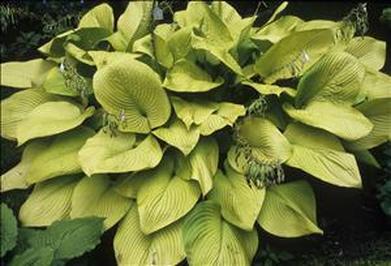 'Key West' forms an impressive mound of slightly corrugated, medium gold leaves that measure 16" x 11".  At maturity can grow to 37" tall by 88" wide. 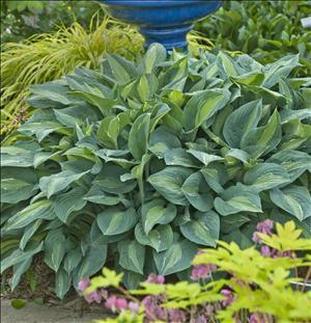 A beautiful sport of 'Striptease', it's very similar,
but has a bluer margin.  Its bright foliage has
white streaks between the primary colors.
Quickly grows to 18" high by 45" wide. 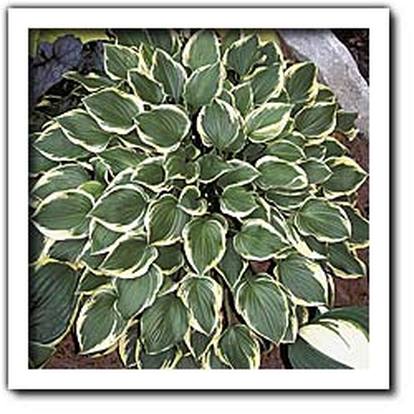 Another great hosta in the 'Lakeside' series.   This variety forms a low, dense mound of dark-green foliage with a creamy yellow to white margin.  Excellent ground cover - grows to 26" wide. 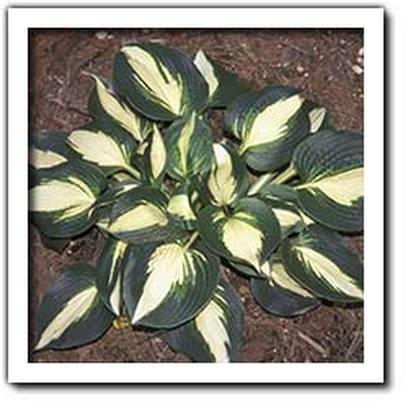 
This striking small hosta  forms a small, 5" tall by 1' wide clump. The thick, heavily-cupped and corrugated leaves are creamy white in the center with a  wide, blue-green border. 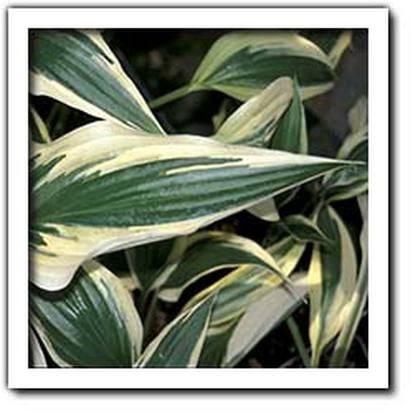 A striking mound of shiny white and
green foliage. Grows to 14" high by 40" wide.

'Lakeside Kaleidoscope' is a small, vigorous plant that quickly forms a
clump of wavy blue-green leaves with an uneven white border.

This attractive hosta has creamy white centers surrounded by a
wide dark green margin.   Produces near white flowers
and has a vigorous growth rate.  13" tall by 37" wide. 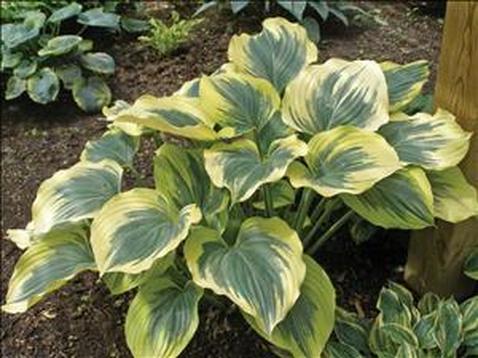 An absolutely gorgeous sport of 'Sagae' (Hosta of the year - 2000). 'Liberty' is an incredibly popular plant, and for good reason.  Broad bands of bright yellow,
rim wavy green leaves.
Grows to 26" high by 63" wide.

A wonderful hosta with heavily textured and rugose leaves that
are yellow-green encircled by a narrow green margin.
Grows to 18" tall by 40" wide.